Talina swears they move like creatures, but as they approach, the party sees three humanoid masses of undulating worms with dull glowing orbs for eyes. The three spawns of Kyuss move to engage the party; each vomits a pile of rot grubs on their way there. The piles of rot grubs begin to undulate too and follow the spawns.

The party leaps into action except for Royce who is buckled onto the metal table with a tube sticking out of his arm; he takes a moment to move off of the table while everyone else launches into battle. Nong approaches a spwan of Kyuss and pummels a fury of blows into it; only to find with each punch, worms fly off of the spawn’s body in the monk’s direction. Nong easily dodges out of the way, but takes a second to register what just happened. When the other spawns of Kyuss engage with the party, they too fling worms from their bodies towards Drow’s Bane; some worms miss but others hit their target, immediately finding the warm flesh under armor and burrow in.

The swarms of rot grubs move slowly but eventually invade Talina’s, Nong’s and Mordrock’s spaces. Nong escapes but realizes too late, that he brings with him several visitors that announce their welcome by burrowing into his flesh. The party takes down rot grubs only to find that the swarms of Kyuss just vomit up more. Royce is next to be infected by worms; he stumbles as the pain is unbearable from the burrowing. Luck is with him however, when he casts a spell that cures disease, the pain disappears. Nong, Mordrock and Talina are not so lucky and one by one they succumb to the extreme burrowing pain and fall.

Thanks to Naismith’s agility, he easily navigates in and out of the swarms path, always able to find a safe location out of their reach; but in doing so, he also sees how his comrades are fast falling around him. The rogue however, has a few tricks up his sleeve as he revives a person here or another there; but as soon as they return to consciousness, the rot grubs agitate, burrow further and take their hosts down once again. One of these people is Royce, who is not fast enough to cast a remove disease spell before the agitation begins, and he closes his eyes once again. The battle does not look good for the Drow’s Bane as Naismith, now perched upon a statue, looks out and sees none of his comrades are conscious while the swarms are fast approaching his location. He gulps and cries out to Tamora for a bit of respite and a little luck.

A crackling sound is heard in the center of the room as a crimson red portal opens up. The first to exit, is a familiar imp the party met in Candlekeep, who flies out and fixes its eyes on Naismith; several fiends exit next. The fiends take down the swarms, then grab the bodies of Royce, Mordrock and Nong and drag them into the portal. The imp says to Naismith, “The Lady requests your presence,” as he points to the portal. Naismith acknowledges the imp but first runs over to Talina, feeds her a healing potion, then enters the portal.

The smell of blood and brimstone ignites life back into Royce, Mordrock and Nong who open their eyes and realize they are in a dim lit room, lying on their backs, looking up. They hear a strong female voice say, “That was a pathetic fight don’t you agree?”

Royce, Mordrock and Nong rise up, see Naismith standing near them looking at the figure in the front of the room. They all lay their eyes upon:

The Arch-devil of Malbolge, Lady of the 6th layer of Hell, Glasya, daughter of Asmodeus. 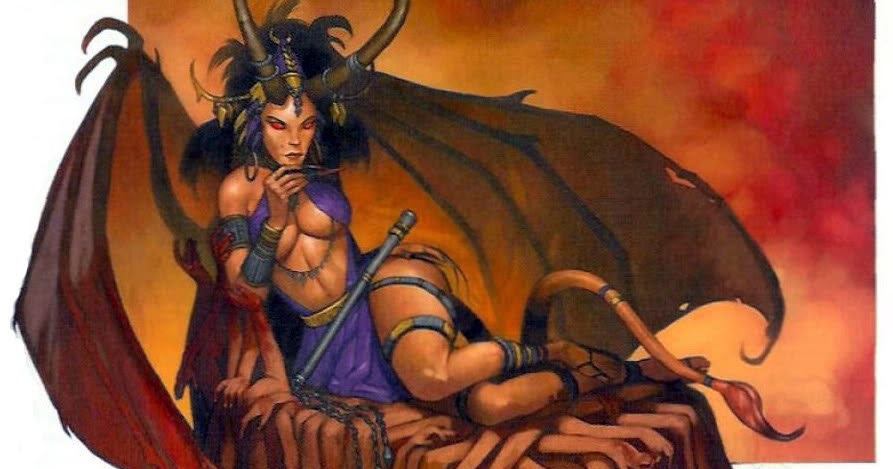 Glasya seductively lays on a chaise lounge made of arms whose bloody stumps ooze blood whenever she moves. She stares intently at the Drow’s Bane, then smiles and says, “Please, have a drink and let’s toast to common goals.”

A platter, with four goblets filled with red liquid, appears before the party; everyone takes a goblet, holds it up and waits. Glasya motions her goblet upward in a toast then moves it to her mouth and sips, while observing the party. Naismith, Nong, Mordrock and Royce follow suit and drink; the liquid tastes like wine and is smooth going down.

A pregnant pause fills the room. As they begin to offer thanks to Glasya, she cuts them off and proclaims,
“I do believe we still share a common goal together. We both want to see the wand of Orcus destroyed, yes? That is why you stand here today in my presence…alive. I am impressed you blindly managed to find your way to the laboratory using the map I gifted to you. You’re welcome,” as she laughs, revealing a mouth full of fangs. She lifts up, leans forward, and uncurls her immense bat like wings that protrude from her back.
“Do you know why you are there? Do you know what it is?”
“Uh…I’m sorry my lady, I don’t believe we do.”
“It is ancient Netherise, built two thousand years ago on the Material Plane. The ancient Netherise were gifted humans steeped in the art of the arcane. One thousand years ago, they discovered an energy source and brought it back to their laboratory. The energy source was nothing they ever experienced before; it enabled them to delve deep into fusing arcane power with simple weapons and armor. It even enabled them to be foolish enough to try their hand at the lost school of chronomancy, which only one of them ever survived. All of the others who cast those spells and traveled through time perished, never realizing there was no air along the way.”

The party takes another sip as she continues speaking,
“What the Netherise failed to realize was their ‘Writhing Battery’ was an aspect of a chained god from the Dawn War – Kyuss, the worm that walks. The pantheon of gods, at the beginning of time, came together to defeat Kyuss; they separated his body into several pieces, imprisoned each one and hid them all over the multiverse. Over time, the Writhing Battery corrupted the Netherise researches and turned them into the spawns you fought – nothing but a mass of worms intent on doing their gods dirty work. In fact, if I didn’t save you just now, you were about to join their ranks,” as she points to Royce, Mordrock and Nong.

“So why do we care about this in the age of today? It matters to us because Orcus, more than ever, hungers to become a god. Since you failed his attempt to align with Bane in Fort Morninglord, he is onto striking a deal with Kyuss next. Thanks to YOU, his wand has been feeding him every soul you strike down Nong!”

The party glances over at Nong, who looks down and stares at the wand in his hand.

“Orcus will be a lot stronger the next time you see him. And now, his pesky cambion minion, Zabrak, has managed to enter the laboratory; Zabrak is close to restarting the ritual to break the aspect of Kyuss free, so that he can join with the Prince of Undeath. But Kyuss’s prison also offers an opportunity for us. His prison is made from the essence of the dawn of time. Hold the essence in your hand and will it to convey to you the coordinates of the location in the Positive plane where you must bath the wand. Only by defeating the aspect of Kyuss first, can you access the essence. You do not realize that you are now entering into a very, very dangerous time Drow’s Bane; a time which you may not be strong enough to handle on your own.

Which Is Why I Now Offer You, A Deal…”

The Lady of the Sixth flicks her hand outward and immediately the party feels something inside the grip of their hands. Nong, Naismith, Mordrock and Royce look down, open their hands and see a ring, made from bone and died crimson red.
“You do not have to accept my offer today. But in order to do so, each of you must break the back of the ring at the same time, this seals the deal. In response, I will call forth my army to aid you.”
“And what do you get out of this deal?”
Glasya shifts comfortably into her chaise lounge, smiles and replies, “Your Souls.”

Glasya reassuringly says,
“Think of it this way. I see three options for your fate:
Option One) Orcus defeats you and he raises you as zombie thralls to mindlessly walk deep in his shit for the rest of eternity…on a good day! Don’t think for a second he is not forming the strongest army that will be able to defeat you. He has learned everything from that wizard who survived your battle – like how you fight, what you cast and when. I wouldn’t be surprised if Orcus unleashed that battle on you, only so he could learn your strategies and tactics!
Option Two) You miraculously save the day all by yourselves. You somehow manage to defeat the god Kyuss, go onto defeating Orcus and his army, and then ride into the sunset, like the heroes you always dreamed to be.”
“I like option two the best in my opinion.”
“Yeah, sign me up for that one!”

Glasya scowls, rolls her eyes, and continues,
“Option Three) You get a clue, realize you are way over your mortal heads, and accept my deal. In return, you are bolstered by a powerful army familiar with how demons and the undead fight, which gives you a real chance of winning without significant cost. Remember this, I’m not interested in zombie thralls. I need lieutenants and captains to lead my army.”

She looks at her goblet while she brings it to her lips and drinks. Silence fills the room as no one speaks a word in response. When she finishes, she looks away and nods. From the darkness, the familiar imp flies into the light and past the party. The imp speaks an incantation, and a crimson portal opens up; it motions the Drow’s Bane to enter. “The Lady is done with you. Now you must go,” it says. The party enters the portal one by one and Naismith is the last to leave. He looks around and quickly uses his blindsense to read the room; he picks up several creatures lingering in the shadows and he also manages to get a glimpse of bejeweled columns and a dais before he disappears.

The party appears back in the room where Talina was left by herself. The final thing they hear Glasya’s voice say to them is,

“Welcome to Fate’s Doorstep. The door is always open.”